From Retro Register
Jump to navigation Jump to search 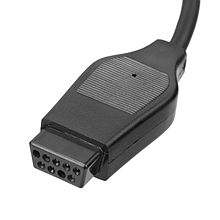 (*3) For the second button/right mouse button the POT X line is used (and for 3rd button/middle mouse button POTY), which - different to the other lines - must be pulled to VCC via the button.

(*4) The CD32 supports "gamepad mode" and uses pin 5 to switch to it (it is pulled to active high by the CD32). Actual CD32 controllers have active components. Regular "Atari" joysticks will work at the CD32, but CD32 controllers will not work on, for example, a C-64 (see here and here)

The Apple-II uses analog joysticks and can not use the common digital joystick with the pinout shown above, see here.

The Sinclair-QL has completely different controller ports. (The US and German versions of the QL later made by Samsung both had standard 9 pin serial and joystick ports, meaning that any Atari standard joystick could then be used.)

The Commodore C16/C116/Plus4 have two mini-DIN ports which are electrically compatible with standard DB9 ports, so they can be used with an adapter.

The Covox Sound Master is a rare PC Soundcard that has two Atari-compatible DB9 joystick ports.